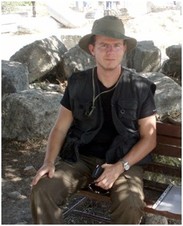 His research work is focused on active tectonics, paleoseismology, tectonic geomorphology and archaeoseismology in the Aegean area. Sotiris specializes in the application of Geographic Information Systems in field mapping, structural geology and tectonic geomorphology. Other research interests include study of secondary earthquake effects (landslides, rockfalls and liquefaction phenomena), hydrogeological evaluation of sedimentary aquifers and neotectonics of the Aegean Volcanic Arc.

He has over 40 publications (papers, conference announcements, abstracts etc.) and has participated in more than 30 conferences and workshops in Greece and abroad. Since 2006 he is a freelance geologist consultant. During 2009-2010 he was an NCO in a Hellenic Army mechanized infantry unit in Cyprus. He holds a Diploma in European Public Law. He speaks English and French.
ResearchGate Profile